888poker counts down the Top 16 Most Famous Poker Players in the World. See if any of your favourites made the list! 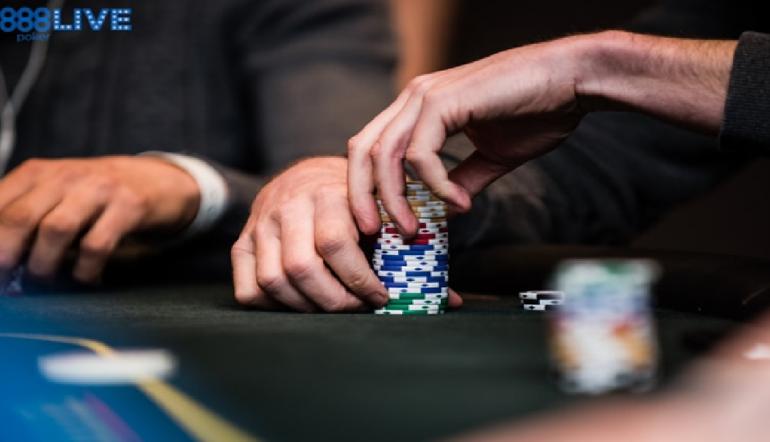 The most famous poker players in the world may not necessarily be some of the best. Nevertheless, plenty of big names like to jump in the actor – whether actors, musicians, or social media mavens.

Their level of success may vary, but poker remains an engaging game for many, and that can even include celebrities.

Here’s a look at some players who gain plenty of attention when hitting the poker tables.

Like his friend Ben Affleck, Damon is no stranger to hitting the poker table. After co-writing Good Will Hunting with Affleck, he rose to fame and has become one of the most sought-after stars in Hollywood.

That includes a roster of films that includes Saving Private Ryan, The Talented Mr. Ripley, The Martian, and many others.

Poker fans may remember more from playing Mike McDermott in the film Rounders. The film has become one of the biggest in the poker genre after its release in 1998.

He has competed in several World Series of Poker events and was even sent to the rail by Doyle Brunson in the 1998 Main Event.

👔 Occupation: Actor, producer, screenwriter
🏆 Achievements: Five-time Oscar nominee, including winning with Affleck in 1998 for Good Will Hunting.
🏅 Notable: A memorable scene in Rounders has Damon facing off against poker legend Johnny Chan.

This actor and filmmaker is a regular at the poker table. In 2004, he won the California State Poker Championship at the Commerce Casino in Los Angeles for $356,400.

That was quite an accomplishment but may rank third place behind his two Oscar wins.

Affleck took Best Original screenplay in 1997 for Good Will Hunting and Best Picture for directing Argo in 2012. A leading man in many films, including a turn as Batman, Affleck makes causes a stir in the poker world when he’s spotted at a table.

Affleck even took his interest in poker to the big screen with the poker movie Runner, Runner in 2013, co-starring Justin Timberlake.

This international soccer icon not only scores on the pitch but also on the felt. Neymar has some scores in the tournament arena.

He’s had some decent finishes online as well. Neymar has said when not playing soccer, the Brazilian phenom is usually playing poker.

👔 Occupation: Professional soccer player
🏆 Achievements: Numerous championships and titles
🏅 Notable: His transfer to Paris Saint-Germain for €222 million made Neymar the most expensive player ever.

This popular funnyman not only scores at the box office but also at the poker table. The comedian from Philadelphia brings plenty of laughs when he hits the tables.

In recent years, Hart has even jumped in high roller events against some of the game’s best. He’s also rumoured to play in some big games in Hollywood when not in front of the cameras filming movies like Ride Along, Jumanji, and The Wedding Ringer.

👔 Occupation: Actor, comedian
🏆 Achievements: $3 billion in box office ticket sales.
🏅 Notable: Don’t look for the stereotypically stoic poker face with Hart, who enjoys mixing it up with some laughs. During the 2018 Super High Roller Bowl, he noted: “Everyone loves to hear me talk!”

While he may not be the most politically correct player around, Bilzerian draws plenty of eyeballs. The so-called “King of Instagram” has 32.7 million followers.

The social media sensation brings plenty of controversy, and that doesn’t even have to do with his poker career.

Bilzerian is said to have made millions in high stakes cash games, but that has been disputed through the years.

The rock ‘n’ roll sensation not only toured the world playing sold-out shows but played plenty of poker along the way. Bandleader Glenn Frey and Don Henley were big fans of the game and played for hours on the road.

The poker action began in the early-1970s when both were part of the backing band for country singer Linda Ronstadt. She often played in those early games and remembers Frey, who passed away in 2016, as the Eagle shark.

“Glenn was always smarter, and better prepared, than you thought he would be,” she told the Los Angeles Times. “It was like going into a card game with him. We used to play poker, and you’d go into a game thinking you were going to take his money, but he always ended up winning.”

Henley grew up in East Texas and is quite a card player himself. The Eagles’ poker games continued for years.

🎸 Occupation: Rock band, songwriters
🎵 Achievements: 200 million in album sales, six Grammy awards.
🏅 Notable: Glenn Frey hosted games at his home in L.A. throughout the ‘70s during Monday Night Football. The games included the Eagles, roadies, and other musicians, Joni Mitchell among them.

Speaking of Rounders, Damon’s co-star may have been even more enamoured with poker. Brilliant in his role as Worm, Norton has also appeared in the World Series of Poker.

The popular Hollywood star has remained a regular at the poker tables. He has also starred in films like American History X, The Illusionist, Red Dragon, Primal Fear, Birdman, among others.

“It’s a very sophisticated game that operates on a lot of levels, both mathematical and strategic, ” he said after getting knocked out of the 1998 WSOP Main Event. “When you’re playing with these guys, there may be luck on any given hand, but over time, the really terrific players will crush it.”

The former Spider-Man and Seabiscuit jockey Red Pollard brings plenty of skills to the poker table. It is believed that Daniel Negreanu tutored him.

Along with Affleck, he’s believed to be one of the celebrities involved with Molly Bloom’s high stakes cash games in the 2000s. Those events were the basis of her hit book and subsequent film Molly’s Game.

Maguire’s Spider-Man proved successful as well, raking in more than $2.5 billion at the box office. Some insiders have said he’s the best poker player in Hollywood.

👔 Occupation: Actor, producer
🏆 Achievements: Believed to have won hundreds of thousands of dollars in Hollywood cash games.
🏅 Notable: It’s been reported that he’s Player X in the Molly’s Game film.

This Texan and outlaw country legend has sold more than 40 million albums. He has inspired artists across the musical spectrum. Some of those also play in his regular poker home game, which he has run well into his 80s.

Nelson is usually the table shark in the games:

"He gave me some knuckles," Jack Johnson told Taste of Country. "I didn't even know what was going on."

A regular at the annual World Series of Poker, this comedian and actor loves the game. His show Everybody Loves Raymond was on the air from 1996 to 2005. He’s also made plenty of appearances at the WSOP.

“It’s always great to play this event, as it’s exhilarating and nerve-wracking at the same time. And it’s also the only event I play every year,” he told PokerGO at the WSOP in 2018.

“Because it’s the only one I play, there’s a lot at stake for me. When I bust this event, I know I’ll have to wait until next year, so I get a little tentative. Together with my buddy who’s also playing, we’re just trying to struggle our way into Day 3.”

This old school actor may love poker almost more than any card-playing celebrity. Notable in Hollywood for an acting career dating back to the 1970s, Woods has two Oscar nominations as well as a Golden Globe.

Poker and gambling fans may also want to check out his performance in Casino, a film about the media in Las Vegas.

He’s a regular cash game player and a regular at the World Series of Poker with $335,000 in live tournament winnings.

While she may be a highly-regarded actress, Tilly has transitioned to becoming a major poker force as well. She won the World Series of Poker Ladies Championship in 2005 for $158,625.

Tilly is also a regular in televised poker games like Poker Night in America and Poker After Dark. She and long-time boyfriend Phil Laak make quite the poker power couple.

She may be one of the best players on this list, and Tilly’s personable, chatty demeanour makes her fun to watch.

The comedian and long-time Everybody Loves Raymond actor has had a lifelong love of Las Vegas and gambling. He’s performed stand-up in Las Vegas for more than 30 years and also owns a comedy club at the MGM Grand.

At the poker table, Garret brings plenty of laughs. He’s appeared in several televised cash games and even hosted his own home game in partnership with Zynga. In addition, Garrett is a regular in private cash games and has also cashed in the WSOP twice.

“I think a lot of people in the entertainment industry, especially actors and comics, we like that rush,” he told Casino Player magazine in 2019. “Good or bad, healthy or not healthy, gambling kind of brings that rush.”

Much of this list focuses on celebrities, athletes, and musicians. However, it might not be complete without at least a few poker players who have risen up in terms of popularity.

The 15-time WSOP bracelet winner undoubtedly stands out in this regard. Hellmuth has no problem finding the limelight, and that’s even being featured on Milwaukee's Best beer can.

His role as an analyst on the WPT’s Raw Deal has even given him a bigger platform.

A regular in televised poker for years, Hellmuth is one of the most recognisable. Love him or hate him, those Poker Brat antics have led to plenty of attention from the general public.

Even in his late 80s, Doyle Brunson played in some of the biggest live cash games in the world. The Godfather of Poker remains popular among the regular Joes because of his connection to poker history, his genial nature, and poker skills.

Brunson has a deep connection to modern poker’s roots in Texas, and his abilities remain super sharp.

When many think of poker history, Brunson might be the first poker player who comes to mind.

Outspoken and a poker player through and through, Negreanu is a regular in televised poker events. His resumé even includes some small acting gigs, including a Wolverine movie and Katie Perry video.

This sampling represents a few of the big names heading to the poker tables. While some of the most popular players may not always be the best, their fame is undoubtedly good for the game.

A little extra poker in the limelight can bring new players to the tables. 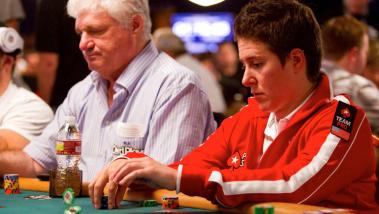 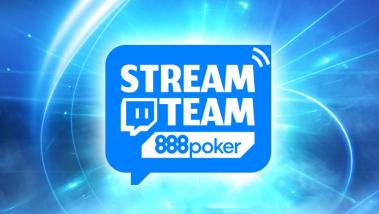 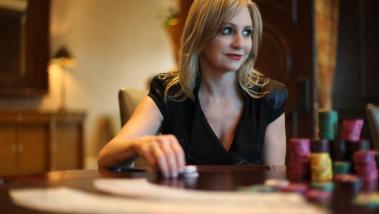 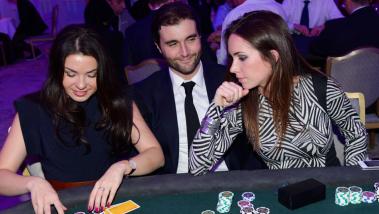 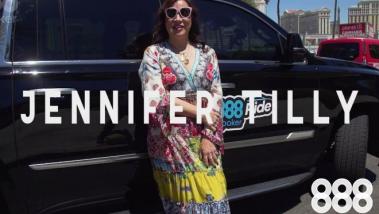