The Poker Min-Raise – What You Need to Know

In poker, there is a limit to how small we can raise, and this raise increment is known as the min-raise. Learn how to build your min-raise strategy. 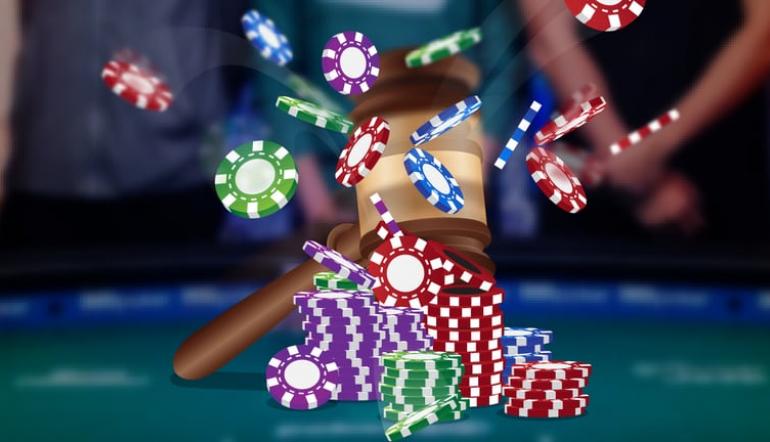 Min-raises are a relatively common occurrence in poker. It’s useful to understand when min-raises might make sense and how to respond against them.

Let’s start with a quick definition.

In other words, there is a limit to how small we can raise in poker, and the smallest possible raise increment is known as the min-raise.

The min-raise is often twice the size of the previous bet, but not always, so it’s essential to know how to calculate min-raises correctly.

As a start, the first bet in the sequence may never be less than the amount of one big blind (or one small bet in the case of limit games).

Any subsequent raises must be at least the size of the previous raise.

Player A’s bet is equivalent to raising by 4bb because 0 chips had been wagered at the start of the flop betting round. Therefore, Player A has increased the size of the wager by 4bb.

If player B wishes to raise, he must raise by at least another 4 big blinds for a total size of 8bb. Any raise smaller than this would not be valid.

Take a moment and think. What is Player A’s minimum allowed re-raise sizing on the flop? Player B raised Player A’s sizing for considerably more than a min-raise, i.e. by an additional 8bb.

If Player A wishes to re-raise, he must re-raise by at least another 8 big blinds.

In this instance, if Player A had doubled Player B’s sizing by raising to 24bb, he would be raising by more than a min-raise. Player A only needs to raise to 20bb to satiate the minimum raise requirements.

Preflop scenarios tend to cause the most confusion concerning min-raises. Take a moment and calculate player B’s min-raise (3bet) sizing in this example. Well, how much was player A’s previous raise? 3bb? Unfortunately, no. 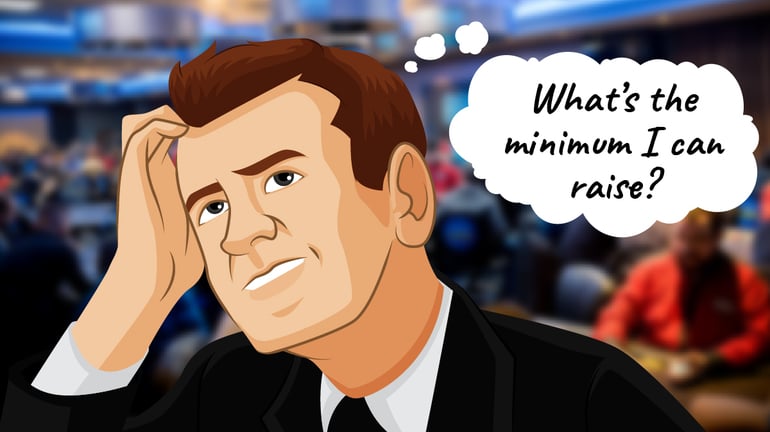 Remember that the previous wager was the 1bb mandatory BB post. So, although player A is raising to 3bb, he is only raising by 2bb. Therefore, Player B only needs to raise by another 2bb to satisfy the min-raise requirements.

Player B is legally allowed to raise to 5bb. Many players mistakenly assume that 6bb is a min-raise here.

The main advantage of min-raising is that it allows us to save chips when used in the correct context.

An excellent application of the min-raise is min-raise bluffing when our opponent is showing inelastic folding tendencies. The term ‘inelastic’ means that Villain will fold the same frequency regardless of the size of our raise. Raising smaller in such instances means our bluffs instantly become more profitable.

Two of the most common examples of this -

1) Min open-raises when attempting to steal the blinds.

2) Raising against our opponent’s turn bet.

Although we can technically min-raise bluff on any postflop street, the most common min-raise bluffs are on the turn. Flop raises usually end up being larger, and river raises are scarce in themselves.

However, we could employ min-raises on any street if our opponent is not adjusting his folding frequency, based on our sizing.

Another example where we might elect for the min-raise size is when we are going for thinner value. Naturally, the larger we raise, the harder it is to get called by enough worse hands for our value raise to be profitable. This fact is especially true on the turn and river, where many opponents will be inclined to give our raises an above-average amount of respect.

However, this does not mean that we should select min-raises by default. Stronger hands should typically be looking to raise larger where possible.

So, although the min-raise is a useful tool in our arsenal, using it in the wrong spots can result in missed value.

What if we are, instead, on the receiving end of a min-raise.

How should we respond?

There are two essential principles to keep in mind here -

1. It depends on the street

Facing a preflop min-raise is hugely different from facing a river min-raise.

Keep in mind the following as a general guide:

The later the street, the stronger the min-raise.

A preflop min-raise could be any two cards in Hold’em, while a river raise is often a very strong made hand, perhaps even the stone-cold nuts.

2. We should continue wider vs min-raises than larger raises.

Although some Villains may be min-raising an overly strong range (especially on the later streets), we still have to defend wider than we would against a larger raise. Failure to do so would result in some exploitative opportunities for our opponent (their min-raise bluffs start to become overly profitable since we fold at an inelastic frequency).

Here is a quick overview of the types of difference min-raises we see on poker’s most popular variant, No-Limit Hold’em.

As we can see, not all min-raises are created equal. It’s imperative to account for the exact scenario and type of opponent. This outlook also holds true when we are the raiser.