THE THEORY AND MECHANICS OF BLUFFING IN POKER

Bluffing is a fascinating part of poker. It involves betting with a weak or marginal hand with the intentions of getting your opponent to fold a better hand than you, awarding you the entirety of the pot in the process.

In a game where players must constantly make decisions based on incomplete information, to bluff successfully, players must assess all the information they do have available to them so that they can try and surmise whether: 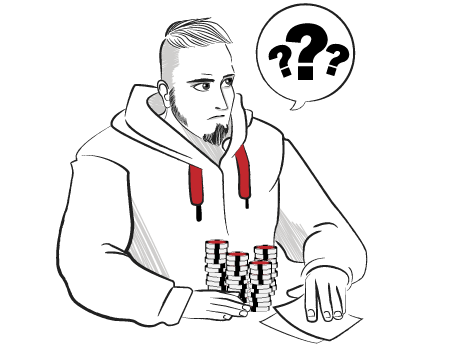 To give you a nudge in the right direction, below is a list of questions you should ask yourself after every bluff attempt you make (successful or     unsuccessful).

Thinking about and answering these questions honestly will help you continue to improve your game and keep up with the improvement curve of your opponents, too!

• Did I range my opponent correctly before attempting my bluff?
• Did my opponent play his hand in a tricky manner, which caused me to         incorrectly assess his hand range?
• Did my opponent call me with a weak holding after my bluff?
• How can I use this new information to exploit my opponent later?
• Was my bluff bet sized correctly? Should it have been smaller to save money when called, or should it have been larger to fold out more hands of my opponents range and apply maximum pressure?
• Did my betting and bet-sizings throughout the hand make sense for the hand I was representing and the story I was telling?
• Did my hole cards get exposed at showdown, and what my opponents assume as a result for future hands? (i.e. Does it look like I might always bluff on the river after missing a flush draw?)
• How does my table image look now after my bluff?
• How can I use what I think my opponents now think of me to my advantage for future hands?

Just because of the negative things that can come because of bluffing (the most prominent being losing money that you didn’t have to), don’t be conned into believing that you should only be playing hands for value.

WHY YOU SHOULD BE BLUFFING 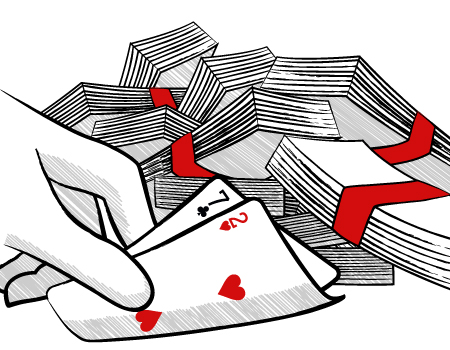 In fact, on the contrary, bluffing is a vitally important tool to include into your arsenal of poker skills, for a multitude of reasons:

• Balanced Ranges: Being capable of running big bluffs will also create a reason for other players to give you action and pay you off when you do have very strong holdings. Some players never bluff and only bet and call relative to the strength of their actual holding. This means that they’re only going to bet big and for multiple streets when they have an absolute monster.

• Psychological Reasons: Adding on to the point above, having bluffing capabilities in your poker arsenal creates a whole new psychological element to the game for both you and your opponents. No one ever wants to fold the best hand; on the other end of the spectrum, it can bring one great pleasure when being able to push someone off a better hand.

• More Chances to Win a Poker Hand: If you’re capable of bluffing, it means that you’re an aggressive player (simply because you’re likely doing most of the betting and raising during the hands you play). Aggressive players have much better potential for being winning poker players in comparison to passive players because they can win pots by (1) getting their opponent to fold; or (2) having the best hand at showdown. Passive players, on the other hand, can only win when they call and have a better hand.

• Increased Win Rates: When thinking about long-term profits in poker, a lot of the time the tipping point will come down to all the small pots you pick up and win. Think about it – assuming that (over time and a large enough sample size) you will have all the coolers and suckouts working both for and against you The real long-term profit comes from picking up all the other, often smaller pots in between, either from maximising your value when you have the best hand or from bluffing your opponent off the pot. Bluffing in the right spots will often end up being the tool that can help give you the profitable edge you’re looking for. 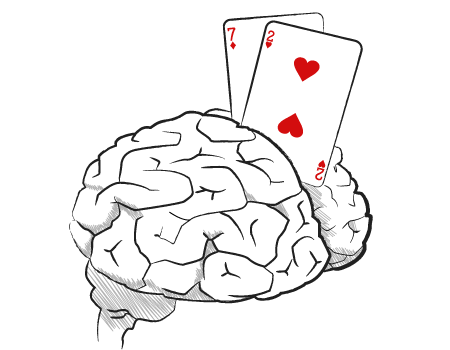 To ultimately understand physical poker tells, it’s important first to study what happens to the brain during a bluff, and why opponents’ body language might undergo subtle, noticeable changes as a result.

When someone makes a poker bluff, they are essentially telling a lie to their opponents; they’re saying to them that they have a stronger hand than they have. Whenever a person lies, regardless of what it’s about, different parts of that person’s brain are activated in varying amounts than what is normal or when they’re telling the truth.

One such part is the limbic system, which is involved in dealing with one’s levels of anxiety. As a result of its more prominent activation, it often causes subconscious bodily actions to take place that coincides with the bluffer’s newfound feeling of anxiousness.

To sum up, the specific key points regarding the physiology of the brain when someone lies, here are the key facts:

• The temporal lobe is used to cross-check whether what someone is saying corresponds to a certain memory or visual image they have in their brain.

• The frontal lobe is then used to assist the brain in ignoring and “pushing aside” what it knows to be true. Interestingly enough, the frontal lobe of chronic liars is prominently developed than others, which means they’re better at believing fictitious thoughts that are not a part of their realities.

• The limbic system is involuntarily utilised to exhibit traits of anxiousness that come as a result of bluffing or telling a lie.

While the temporal and frontal lobes are adept at being able to lie, as aforementioned, it’s the control that the limbic system has on revealing subconscious bodily changes that will likely be the ultimate giveaway in exposing the bluffer’s true intentions.

Can these subconscious changes be lessened, changed, or altered, though, to deceive opponents from noticing if a player is bluffing?

Polygraph machines – instruments used to detect whether someone is telling the truth or not – don’t always carry accurate results. In fact, it’s been found that the tests conducted using these machines are only 50% to 90% accurate.

As this technology measures for genuine anxiousness (as caused by the limbic system when someone is bluffing or lying), if the subject is either overly calm or anxious, this can cause the results to be skewed.

Therefore, one way to hide your bluffing tells is to remain calm and keep a strong, resilient poker face when you play. If you’re able to act methodically in a consistent manner whenever you act (bluffing or value betting) with focus and poise, it will be very difficult for your opponents to pick up any additional information from your body language (re: poker face). 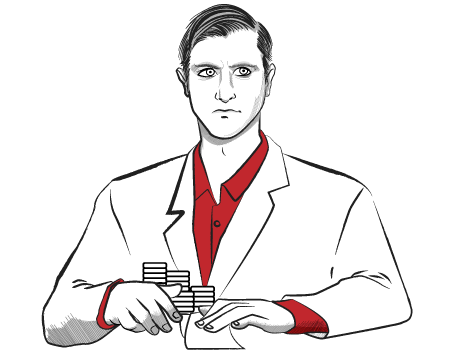 Another way you can cover up some more of your subconscious bodily reactions is first to develop a greater awareness of what these reactions might be and then practice not to do those things when you play. (Again, consistency in your movements from one hand to another is pivotal.)

For example, you may find that you naturally tense up your shoulders, have shallow breaths, and/or protect your chip stack with your hands only when you’re bluffing. It would be advisable when you’re bluffing to (1) stay as calm and relaxed as possible, and then (2) focus on not expressing these subconscious body tells if they might arise.

NOTE: You might not be able to control truly subconscious things such as pupil dilation or heart rate, but for something like tense shoulders when bluffing, you can develop (1) a conscious awareness first of whether or not they’re tense, and then (2) work toward relaxing them back to normal so that players will not be able to go off of this tell. It all starts with awareness, though; the more awareness you have initially, the more conscious control you’ll be able to develop over your subconscious reactions and physical tells.

To learn more about what subconscious reactions you should become aware of for poker bluffs (so that you can both notice these in other players and better consciously control the tells given off when you’re bluffing), continue reading the next section of the book where we’ll discuss how to spot a poker bluff.

Newer poker players tend to enjoy the aspect of bluffing far too much. Not only do they attempt bluffs far too often, but they also pick sub-optimal spots to try them in. While you can try running a bluff at any time, the “skill” aspect of bluffing comes in correctly identifying when the opportune times are to bluff, and then acting on it.

Over the course of this eBook, we’re going to look at almost everything you need to know about bluffing. With topics ranging from bluffing tells to optimal bluffing strategy and bluffing examples to what happens physiologically to your body when you bluff.

By the time, you’ve finished reading this eBook, you’re going to have a wealth of information under your belt that will allow you to spot a poker bluff better, as well as bluff in optimal spots yourself and do so with finesse!