Knowing whether to fire that third barrel can be a bit tricky. Should you 3-barrel bluff or give up and call it a day? Find the answers here. 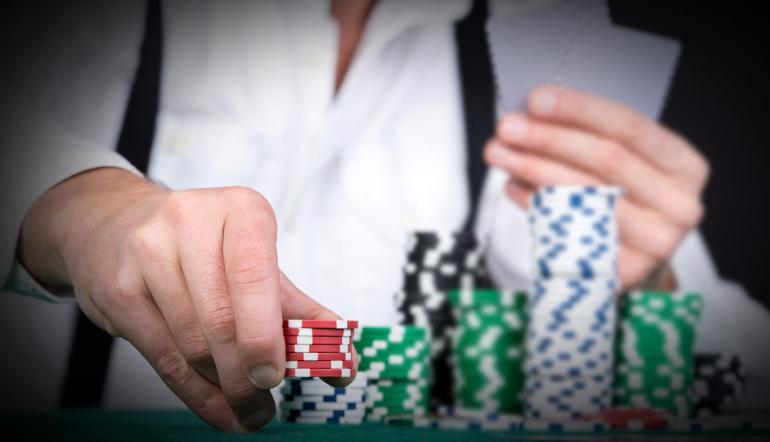 Facing a triple barrel from our opponent can be a daunting prospect. This fact is especially true when we hold some type of mid-strength hand that we would have loved to see a showdown with. Faced with this display of aggression from our opponent we have no choice but to fold.

Despite this being an aggressive play, the truth is that it is nearly always a value-heavy play. Most players don’t 3-barrel bluff nearly as much as they should. Assuming we are following an optimal poker strategy, we should be bluffing almost 30% of the time in the majority of triple barrel situations. The average player bluffs more like 5% of the time, or never at all.

So, when is it correct to triple barrel, both as a bluff and for value?

What is a Triple Barrel, Anyway?

If any of us is feeling slightly confused, here's a quick definition of what we mean by “triple barrelling”. We are referring to a situation where we fire consecutive bets on the flop turn and river. Each bet is referred to as a “barrel”, there are three streets (flop/turn/river), and so the name, “triple barrelling”.

Many of us will triple barrel for value, naturally. It’s 3-barrel bluffing that feels a little counter-intuitive. Let's start first by briefly outlining our 3barrel for value strategy.

It’s important to qualify these assumptions since there will be many exceptions. Let’s consider a few.

1 – Opponent is a Calling Station – Hopefully, it should be reasonably obvious that if our opponent has a hard time laying down any pair, or even Ace-high, then our top pair might be good for 3 streets of value - regardless of our kicker.

So, if we flop top pair on an As7c6c board with AJ, we may struggle to get 3 streets of value. In fact, we should nearly always only go for 2 streets, unless we have a good read on our opponent. But now let’s imagine we double-barrel AcJc on the 6c7c2h 3h board, and the river comes As; we can usually fire the river again for value. Our opponent will call with their worse pairs more frequently because they are less inclined to believe that we spiked an Ace on the river.

3 – The board runout is terrible, so we can’t even value-bet 2pair – Let’s say we flop 2pair with 8c9c, and the board runs out as 8h9h2c7sJs. We are doing extremely well on the flop with our top 2-pair, and our intention is to fire 3 streets for value. The turn card is not great, but we are still committed to firing 3.

The river is terrible. Hopefully, we can see why. There is now 4-to-a-straight cards out there. Our opponent is going to be scared that we might have a straight, and they are very unlikely to pay us off with one-pair holdings. Their calling range is likely to now include better 2-pairs, sets, and straights more frequently than it will include worse hands. So essentially, despite possibly still having the best hand, our 2-pair is no longer strong enough to fire the third barrel, and we must check.

Triple Barrelling as a Bluff

It usually takes a little courage the first time we decide to fire that 3rd barrel as a bluff. We are essentially risking a decent chunk of our stack with nothing, and the experience will leave most people feeling uncomfortable. There is a natural psychological resistance to investing large chunks of money on a bluff, and as a result, many players never develop a decent river bluffing strategy.

It’s not true to assume that we are all the same, though. A minority of players appear to have that gambling gene and enjoy the rush of making big bluffs. The average player will rarely 3-barrel bluff, and this is something we can exploit. We should usually give our opponents a ton of credit when they 3-barrel and be prepared to make some good laydowns.

So, how can we reverse the situation and put our opponents under the same pressure with a 3barrel? There are typically 3 things we are looking for to help us identify a good triple barrel bluffing opportunity.

For example when we 3bet a polarised range preflop, do we bet the absolute worst hands in our range? We certainly use some hands as a bluff, but we generally select bluffs that have some type of potential such as suited-connectors or suited-aces. We don’t generally bluff preflop with 27o or 32o. So, while it’s not wrong to refer to this strategy as polarised, the only time absolute polarisation occurs is on the river.

So, why do we prefer the absolute weakest holdings to use as bluffs? The reason is not overly complex. Let’s imagine we double-barrel bluff a certain holding and then river a mid-pair. We might feel that the hand will not win very often at showdown, but it will win with a certain frequency. Therefore, the expectation of checking is non-zero.

If we contrast this to a busted 5-high flush draw, this hand will literally never win at showdown. The expectation of checking will be zero. So if the hand has a positive expectation as a bluff, we should clearly use it for this purpose.

We should take two things away from this:

2 – Good Blockers – This is a little bit of a secondary concept, but the better our opponent gets, the more important this particular component of our strategy becomes. The idea is that the types of cards we are using to bluff with can help us define the frequency with which our opponent is calling or folding.

Imagine we are bluffing on the following runout –

Would we rather hold the Ah7s or the As7s when bluffing the river?

The Ah7s should be a clear favourite. But, why? Put simply, it has the best blockers. What is one of the hands that we are scared of running in to when we 3-barrel bluff this texture? We are obviously somewhat concerned our opponent might have a flush. Holding a heart in our hand is beneficial because it means there are fewer combinations of heart flushes our opponent can have. We should be able to establish that we have increased fold-equity in this scenario by carefully considering our own hole-cards.

With that in mind, what do you think of the following scenario?

Would we rather hold the Ah7s or the As7s when bluffing the river?

Firstly, notice the subtle difference. The flush-draw did not complete this time; the 6 is a club rather than a heart. Does it make a difference regarding which hand we choose to bluff with? Absolutely. Now we don’t want to hold the heart, because it means there will be fewer combinations of busted heart-draws that our opponent can potentially be folding on the river.

3 – Capped Range – It’s always a nice bonus if we can identify that our opponent is capped. By “capped” we mean that his range is constructed in such a way that he can rarely hold anything strong.

The interesting thing we should note about this texture is that it is very draw heavy. If our opponent had 2pair or a set, there is a decent chance that they would have raised against our cbets on either the flop or turn. The river card does not complete any of the available draws, which means our opponent is typically capped at Jx holdings. They may also have Tx holdings and a decent selection of busted draws. It’s always great to know that it is impossible for our opponent to hold a premium when we are considering that third barrel as a bluff.

4 – Turn Selection – Okay, we said 3 pointers, why is there a fourth one? The reason is that this tip is not directly to do with river play. River play is not something completely isolated that occurs in a vacuum. Our flop and turn decisions will have a huge impact on the type of river situations we face.

We should be selecting our turn bluffing range from the hole-cards that have the most poker equity. In the majority of cases, this will be a holding that has a good draw. If we fall into the habit of bluffing the turn too aggressively with air type holdings, naturally we will end up on the river with a whole bunch of air. We’ll put ourselves in a situation where we will be forced to bluff too frequently, or we’ll end up checking or folding hands which we would have preferred to bluff with.

The opposite can be true if we never semi-bluff the turn. Imagine we only fire the turn for value. Our river range is going to be value heavy, and we won’t be able to fire any river bluffs to balance out the times when we are value-betting. A good opponent will be able to make some big laydowns with strong holdings, ensuring that we rarely get paid off.

If we’ve never even considered 3-barrel bluffing, now is the time to give it a shot. It’s something that might feel uncomfortable the first few times we try it, but it should eventually become a standard part of our game.

We shouldn’t get frustrated if our river bluff doesn’t work. This is another counter-intuitive thing about the way poker works. Assuming we bet around 66% of the pot on the river, we only need our opponent to fold just over 40% for it to be a profitable endeavour. Essentially, even if our bluffs fail most of the time, they will still be generating money for us in the long run.