888poker reviews 11 of the top largest poker pots in history, live & online and finds out how they played out. Follow along to see which players have won and lost the biggest poker pots! 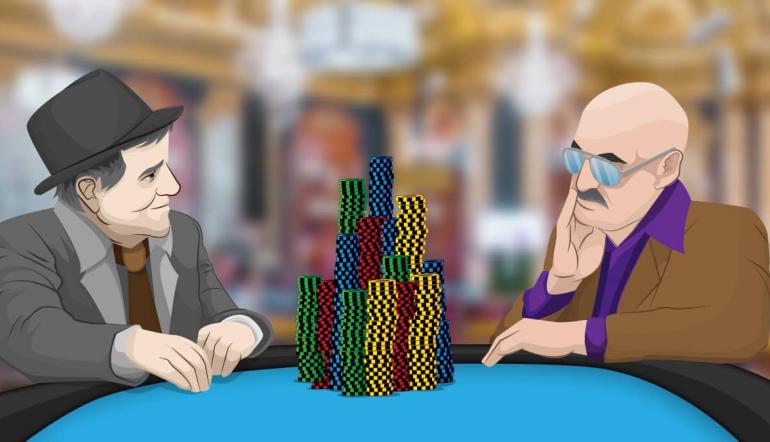 Everyone has that one hand that stands out – a massive pot that either added a ton of cash to your poker bankroll or simply destroyed it. Whether in a cash game or a tournament, sometimes a ton of chips are going in the pot, and you’re either going to be on the good end or the bad.

Here’s a look at some colossal poker pots, live & online  and how they played out.

Dwan versus Ivey for a Million Bucks

No list of massive pots would be complete without this hand that played a few years back between Phil Ivey and Tom Dwan. The event came about in 2010 in the Million Dollar Cash Game in London. Dwan began the hand with $538,500 in front of him and Ivey a bit over $1.1 million. Patrik Antonius also was at the table, which was now three-handed when others hit the exit doors after 20 hours of play.

Dwan made the call, and the miracle 5♥ fell on the turn, giving Ivey an inferior straight to Dwan’s nut-straight. Ivey led out with a $90,000 bet and Dwan thought a long time about his decision. After several minutes, he raised $142,000 more – ballooning the pot to $442,100. After a minute of contemplation, Ivey moved all-in, and Dwan made an easy call. The river brought a meaningless J♥, and Dwan raked a $1.1 million pot.

At the time, the pot became the biggest pot in a televised poker game, and commentator Robert Williamson III noted: “You just saw poker history made right here tonight.”

Negreanu called, but Dwan announced all-in for his remaining $328,000. Folding Kings seemed impossible, and Esfandiari finally made the call. Negreanu then folded his queens, and Esfandiari looked on at the resulting hand with disgust. They ran the hand twice, but it brought no help for Esfandiari, and Dwan took down a $697,100 pot.

In another high-stakes game from several years ago, Jamie Gold and Patrik Antonius were involved in a huge pot that left Gold in rough shape. With A♠J♦, Antonius raised to $4,000, and Gold looked down at K♠K♦. Gold said it felt like Antonius might have Aces but raised to $14,000 with only Antonius calling.

The flop brought the 3♠Q♦10♥, and Gold then bet $15,000. Antonius made the call, needing an Ace or a King for a straight to take the lead in the hand. Of course, the K♥ came on the turn to give Gold trips, but Antonius made his Broadway straight.

Amazingly, Gold hit a Queen on the river to win the first and then a 3 on the second for a full house and a $500,000 score. A 10 on the third run gave Antonius one “small” victory.

This hand came about in 2018 as part of the Triton Poker Super High Roller cash game in Jeju, South Korea, featuring a $1 million buy-in. The game is played using the Korean Won, and there was plenty of cash “won” in this one. A familiar name surfaces yet again, with Tom Dwan mixing it up in this nosebleed level cash game (at the 3:42 mark in the video below).

In this hand, blinds are ￦3 million/￦6 million with a ￦6 million ante and a ￦12 million straddle. With K♥Q♣, Dominik Nitsche opened the action with a raise to 30 million, which is re-raised by to 120 million by Tom Dwan with A♠Q♥.

Paul Phua then raised to a hefty 320 million with A♥A♣, moving the pot to a whopping $431,000. This time, however, Dwan would be on the wrong end of this big hand. He announced all-in after four minutes and received an instant call from Phua.

With a mountain of chips in the middle, the pot was valued at just under $2.5 million. The flop brought 7♥K♣4♥ with a 3♥ on the turn and a meaningless Q♦ on the river. Dwan stood up and made his exit after the crushing loss.

Ivey Makes a Huge Call for the Win

This interesting hand played out on the popular “High Stakes Poker” television show a few years ago near the end of that day’s session. Gus Hansen raised under the gun with Q♣6♦ to $4,200. After a few folds, Eli Elezra made a call with 9♣5♣ as did Phil Ivey with 9♠9♦. With A♥4♥, Jason Mercier raised to $22,100.

Ivey thought a bit and muttered, “If you’ve got the overpair, then you’ve got me,” before making the call for a $425,400 pot. Mercier was left with only a 32 per cent chance to win and needed an Ace or a 5 for a straight. After Ivey just wanted to run it once, Mercier got no help on the turn and river, the 8♣ and Q♠. Ivey caught the bluff and raked a massive pot.

High Stakes Poker produced another monster pot a few years ago, this time involving two of the biggest names in televised poker – Patrik Antonius and Daniel Negreanu. With 5♦5♣, Hansen opened the betting with a raise to $2,100 and Negreanu three-bet to $5,000 with 6♠6♥. The action folded around to Antonio Esfandiari, who folded A♦Q♣.

The flop brought some big fireworks with both players hitting trips after the dealer spread 9♣6♦5♥. Hansen checked, and Negreanu bet $8,000. After thinking about his options for a bit, Hansen raised to $26,000 believing his hand was good, and his opponent decided just to call. That changed when the 5♠ came on the turn. His quads were undoubtedly in a commanding lead. Kid Poker hit a full house that would probably spell doom.

After a bit more thought, Hansen led out with a bet of $24,000, and Negreanu took his time in making another move. Hansen stayed calm while his opponent mulled his options. Negreanu eventually made the call, slow-playing his full house and not realising his bad luck in this one. Only the last 6 in the deck would bail him out.

The river brought an 8♠ and amazingly, Hansen checked his hand hoping to induce a big bet from Negreanu. When he fired $65,000, Hansen moved all-in for $167,000 more. Negreanu then noted, “You might have the nuts,” but eventually made the call. The results are sick, and the Great Dane pulls in a $575,700 pot. It was quite a cooler for Negreanu and a miracle one-outer for Hansen.

“It’s a big pot,” poker legend Doyle Brunson can be heard saying in the background after that final hand. “But I’ve seen bigger.” Probably not too many as you may have seen from these poker hands. Poker is certainly on an upswing and no doubt some will be looking to play at these massive stakes. It takes an enormous bankroll – and plenty of nerves.

A Seven-Figure Pot at Nosebleed Stakes

Patrik Antonius and Viktor "Isildur1" Blom have become some of the biggest names in poker. Both players have won millions of dollars online and in a live poker setting. Blom regularly played several tables at once against some of the best players in the world. The two were locked in a high-stakes heads-up cash game in 2009 when one of the biggest pots in poker history developed.

The two players were stacked deep and playing Pot Limit Omaha with stakes of $500/$1,000. There was heavy betting before the flop and Antonius made a five-bet with A♥K♥K♠3♠. The flop brought 5♣4♠2♥ and both players quickly got all their chips in the middle for an unbelievable $1,356,946 pot. Antonius was ahead and held the wheel straight. Blom showed 9♠8♥7♦6♦ for an open-end straight draw. The 5♥ on the turn was even better for Antonius,  giving him a flush draw. The 9♣ on the river was no help to Blom and Antonius raked a monster pot – the biggest online pot in history.

Isildur1 Gets Some Back Against Ivey

Just a couple days later, Blom got some of those chips back in a massive pot with Phil Ivey in another $500/$1,000 PLO heads-up match. Ivey started the action with a raise to $3,000 and his Swedish opponent three-bet to $9,000. Ivey then four-bet to $27,000 and Blom made the call. The flop brought J♠K♠J♦ and both players checked.

Just a week before Blom and Antonius mixed it up for the biggest pot in online poker history, the two were involved in another massive hand. Again playing a $500/$1,000 PLO heads-up cash game, Blom raised $3,000 and Antonius made the call. On a flop of  5♥7♥Q♠ flop, Antonius checked and Blom bet $5,000. Antonius then raised to $21,000 and Blom called.

The A♦ came on the turn and Antonius bet $48,000. Blom then made a hefty raise to $192,000, and Antonius moved all in for $416,479. Blom made the call and turned over A♠K♠Q♦T♥. Antonius tabled A♥Q♣9♠6♥. Both players had the top two pairs, but Antonius also held a flush draw and an inside straight draw. That river indeed brought the 8♦ giving Antonius’ his straight and a pot of $878,959. These kinds of massive pots seemed to be the norm for Blom in the late 2000s and his actual identity wasn’t revealed until 2011. The young Swede was one of the most exciting online cash game players in the game with numerous poker fans checking out his online action and massive swings each night.

Tom Dwan has been involved in some big pots online as well. This one involves a $500/$1,000 No Limit Hold’em cash game with five players at the table. Dwan was on the big blind and had almost $314,000 in front of him. The player under the gun was believed to be French-Canadian entrepreneur Guy Laliberte playing under the name “patatino.” He raised to $3,500 and Dwan then reraised to $11,500 after the other players folded. The flop then brought 4♠A♠3♣. Dwan then led out for $15,600 and patatino raised to $70,300, which was called by his opponent.

Ivey’s Full House Pays Off in a Big Way

Sean Chaffin is a poker writer who appears in numerous websites and publications. He is also the host of the True Gambling Stories podcast
Related Content
Counting Down the Top 7 Most Famous Poker Hands in History! 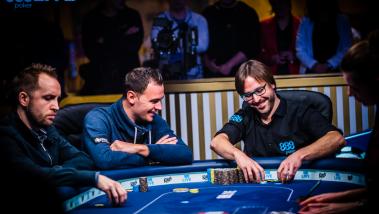 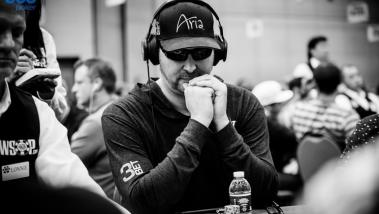 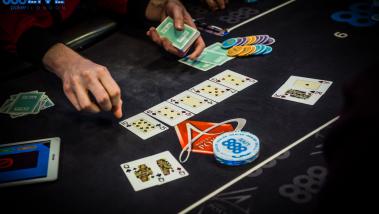 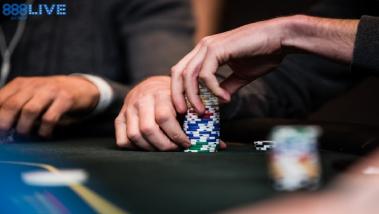 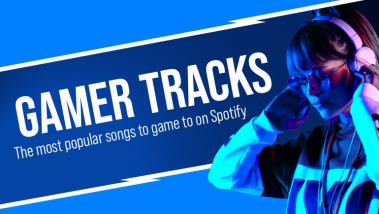